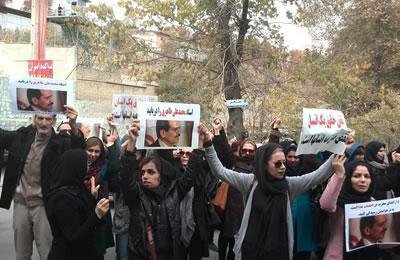 State Security forces prevented a gathering in Tehran in support of Mohammad Ali Taheri on May 12, 2016.

A number of participants were arrested and transferred to an unknown location. Ms. Shabnam Azizpour and Ms. Fatemeh Latifi are among those arrested.

In another development, Mohammad Ali Taheri’s sister also protested the extension of his detention after serving his sentence. She said, “He has been interrogated once more during his temporary detention. Officials have renewed the charge of ‘corruption on earth’ and added a new charge against him of ‘membership in the People’s Fedayeen Organization’.”

“This is a false allegation and my brother has not accepted it. They have pressed the new allegations to keep him in jail,” she added.