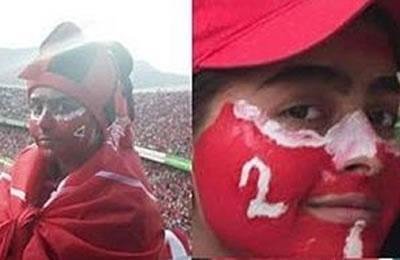 “This outlaw girl must be arrested, put in a metal cage and burned in front of Azadi stadium to teach a lesson to all the women who like football, not only in Iran but across the world.”

The above comment was posted in the state-run Ghanoon (Law) newspaper, in reaction to the news of the arrest of a 15-year-old girl for entering Azadi Stadium. The Iranian regime backs such violence and savageries against women through legislations passed under the pretext of promoting virtue and prohibiting vice.

On May 13, a 15-year-old girl managed to enter the stadium for watching a football match among 100,000 men. Moments later, she posted a picture of herself in the stadium on the internet and wrote, “I had said, I would enter the stadium. Now, I am here.” She had worn 5 blouses and 5 trousers to avoid being discovered.  Yet, she was arrested and the news was published in the media. (State-run ISNA news agency – May 18, 2016)