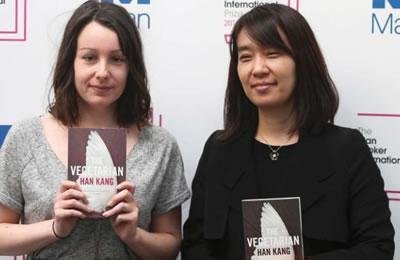 The Vegetarian by Han Kang was announced as the winner of the 2016 Man Booker International Prize.

The novel was translated by Deborah Smith and is published by Portobello Books. Celebrating the finest global fiction in translation, the Man Booker International Prize awards both author and translator £25,000, along with a newly designed trophy. They have also received a further £1,000 each for being shortlisted.

Han is a South Korean author who currently teaches creative writing at the Seoul Institute of the Arts. Already very successful in South Korea .The Vegetarian is her first novel to be translated into English.

The novel was translated by 28-year-old Smith, who only started learning Korean at the age of 21.

The Vegetarian follows the story of Yeong-hye, a dutiful Korean wife who, spurred on by a dream, decides one day to become a vegetarian. This subversive act fractures her family life and, as Yeong-hye’s rebellion manifests in increasingly bizarre and frightening forms, turns seemingly ordinary relationships into those driven by violence, shame and desire.