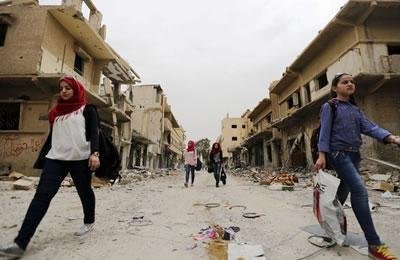 More and more Syrian women are at the forefront of new efforts to solve local conflicts and counter the death and destruction that has engulfed the country.

AMMAN, JORDAN — It is almost impossible to find any silver lining in Syria’s war, but the growing number of women taking on the role of change makers in the war-ravaged country may provide a sliver of hope with potential lasting ramifications.

As in a number of Arab countries, many of Syria’s women were largely sidelined and confined to traditional roles before the uprising against Syrian president Bashar al-Assad and the subsequent outbreak of war.

Now, however, more and more women are at the forefront of new efforts to solve local problems and to counter the seemingly never-ending violence.

This is in part because so many men are engaged in battle, have been imprisoned or have fled the country and women have had to step into new roles, but also because the Syrian uprising has upended a lot of social norms and customs.

One of the ways in which women have come to the forefront is by starting their own independent web magazines and radio stations, such as Jasmin Syria, Sayedet Souriya, Radio Souriyat and Nasaem Radio. All four web-based platforms operate inside and outside of Syria, and focus on highlighting the daily struggles of Syrian women amid the conflict.

Even in the alternative media that emerged at the beginning of the uprising, the role of women in the movement was minimized. When women were mentioned, they were portrayed as the mothers, sisters or wives of male political prisoners or male fighters.

But now all that is starting to change, said Reem al-Halabi, director of Nasaem Radio, based in the opposition-held half of the divided city of Aleppo.

“The stereotypical image of women presented in media reflects a patriarchal society,” said Halabi. “Women’s interests are not limited to fashion, beauty, cooking, family and children. This image does not reflect the real interests or concerns of Syrian women or how hard they are working to take part in building their country.”

Syrian women work on their field in the village of Tarafat, Syria, in October 2012. (AP/ Manu Brabo)

More women are also launching community initiatives, such as Women Now for Development, a center formed by women in 2012 in the besieged

town of Hazza in the southwestern Damascus countryside to provide training and new skills. The initiative is primarily focused on young women who have had to quit school due to the deteriorating security situation and widows who need to generate income to support their families.

Layla, the manager of Women Now for Development, said the conflict had paradoxically “opened new horizons” for some Syrian women. “They are more self-confident and not afraid to express their opinions anymore, and this is reflected in the way they raise their children and deal with their husbands and the society around them,” said Layla, who asked that her real name not be used for security reasons.

Muzna al-Jundy could not complete her master’s degree or find a job due to the ongoing violence and the restriction of movement caused by the ubiquitous and ever-changing military checkpoints.

“The center provided me and many others with the opportunity to get out of the house, and start work on our own projects,” Muzna said. “This was the first personal, positive thing that had happened to me in years.”

Layla, the manager with Women Now, said workshops on women’s rights have increased the number of female voters in local council elections in Eastern Ghouta, a suburb of Damascus that has been under tight government siege for nearly four years.

“Since the revolution began, Syrian women have shown an interest in politics,” she said. “They do not base their opinions on what men say. They form their own opinions by analyzing the news themselves.”

Reem Kanjo, a manager of the Women Now center in the northwestern city of Saraqeb in Idlib province, said women were still marginalized, but that it was a natural result of the growth of extremism and the spread of military factions in Syria and was a temporary phase.

“The situation will gradually change with the continuous insistence of women to have a role in decision-making,” she said.

Most of Idlib province is controlled by al-Qaida’s Syria affiliate, al-Nusra Front.

A displaced Syrian woman and her daughter stand at the door of a school where almost 15 families from Homs are living, in Souran village, Syria, Monday, Oct. 1, 2012. (AP/ Manu Brabo)

Another such initiative is the Network of Guardians, which was founded by a group of young women in 2012 and provides training for parents in the care of children during emergencies – for example, how to deal with the psychological shock many children suffer after a bombing.

The organization also works with educators in besieged Eastern Ghouta, near the capital, and northwestern Idlib to develop school curricula that take into consideration war and its influence on children. The network contributed to a project to include children with special needs in public schools – something that had never been attempted before.

“My work with the Network of Guardians helped me develop management skills, which was something I never learned in college,” said Hiba, a fourth-year architecture student at the University of Damascus who had to quit her studies after the government sealed off her home town of Douma from the rest of the capital in 2013.

Hiba, also not her real name, said she stayed at home for five months before finally joining the Network of Guardians. She hasn’t looked back since.

“The current conflict in Syria has played a positive role in breaking the stereotype of women as housewives. Women today have a great opportunity and they should take advantage of it, especially with the number of men being lost in Syria to the fighting, imprisonment and abduction,” she said.

More women are also trying to change things through political activism – even taking on the so-called Islamic State (ISIS).

In the city of Raqqa in northeastern Syria, for example, Suad Nofal has become a symbol of resistance to tyranny. For a long time, she had opposed the Syrian regime. Later, she confronted ISIS.

When the city broke away from the Syrian regime in March 2013, she contributed to establishing the local government council. And when ISIS took control of the city and started abusing residents, Suad protested daily in front of their headquarters for more than two months, calling for the release of the people they had arrested.

Since she had been a well-known teacher in Raqqa, she initially succeeded in opening a dialogue with a number of ISIS fighters who were former students – a fact that irritated ISIS’s foreign leaders. They banned their fighters from talking to her, and then began to harass and threaten Suad before issuing a fatwa calling for her execution, which forced her to flee to Turkey in 2013.

In Turkey, knowing that the media was covering her activities, she began a hunger strike in solidarity with the besieged in Homs and Ghouta. In 2015, Suad received the Czech Homo Homini Award for human rights.

And while it remains to be seen what plaudits her fellow activists still working hard inside the country will receive, one fact cannot be ignored: despite the war, and despite rising levels of conservatism, women across Syria are stepping up to make a change.

Iran: Female political prisoners in Evin barred from correspondence with their families