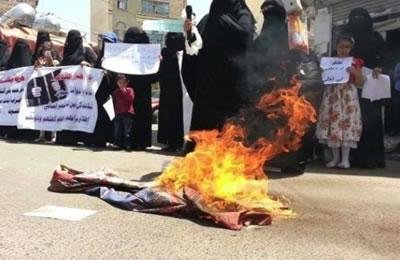 Yemeni women burning their hair to protest the militias

Dozens of Yemeni women burned their hair and burqas on May 24, 2016, outside the Presidential Palace in San’a in protest to the arrest and abduction of their children by the Iranian-backed Houthi militias.

“This type of protest by Yemeni women is meant to say that the Houthies have left no respect for the religion, ethics and even tribal traditions,” a Yemeni journalist, Ahmed al-Zargha said.

The last time such protest occurred in Yemen was in 2011, during the popular demonstrations against ex-president Ali Abdullah Saleh, when dozens of women set their hair and Burqas ablaze to protest the failure and continued suppression of peaceful protests.

Hakimeh Karimi: I remained faithful to my pledge