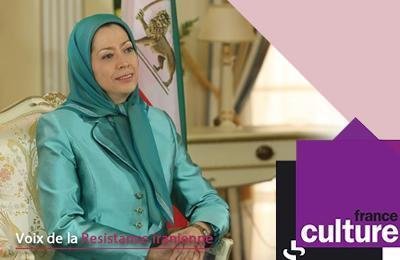 In the course of this documentary produced by Olivier Steiner and Assia Khalid, France Culture’s reporter interviews Maryam Rajavi and a number of members of the Iranian Resistance as well as other French personalities including Antropologist Françoise Héritier, former Human Rights Minister Rama Yade, and François Colcombet, President of the Middle East Studies Foundation.

Referring to the opposition National Council of Resistance of Iran in the beginning of the program, the reporter says: This opposition has existed since the Shah’s time but today it has elected a woman as leader, Mrs. Maryam Rajavi.

The National Council of Resistance is a coalition comprised of opposition groups including the People’s Mojahedin of Iran. Olivier Steiner met with many members of the Resistance, both men and women, at the NCRI office.

In part of this program, Maryam Rajavi responded to the questions of France Culture reporter on the plight of women in Iran and the Resistance’s outlook. She explained:

The religious dictatorship in Iran relies on misogyny. The Iranian regime advocates a male-dominated and inhumane ideology. In their laws, women enjoy half of the rights of men. One of the first repressive measures adopted by the clerical regime was the mandatory veil. I am strongly opposed to imposing the veil on women whether in my own country or in any other part of the world. Every woman must be free to choose her clothing. The NCRI defends the right to freely choose one’s clothing just as it defends other freedoms.

You know that Hassan Rouhani was one of the first (Iranian) regime officials implementing the plan for mandatory veil. Today, he is the regime’s president and is wearing a mask of moderation. Yet, in the three years of his presidency, 2300 people including some 70 women have been executed.

There is no difference between the outlooks of ISIS and the fundamentalist mullahs ruling Iran. Today, Syria, Iraq, and other Middle East countries have turned into a rampage ground for the Iranian regime and its criminal militias. The Iranian regime is the main force behind the massacre of the people of Syria, their displacement and the influx of refugees to Europe. Just as the crimes of this regime prepared the grounds for the emergence, growth and expansion of ISIS.As you have seen, all these crimes inside Iran and abroad are taking place under the name and by taking advantage of Islam.

The Quran stresses that people, both men and women, are equal and there are no differences between them. The mullahs have institutionalized misogyny in the law but Iranian women have always stood up to the mullahs’ regime.

In another part of her interview, Maryam Rajavi elaborated on the solution: I believe that the ultimate answer to fundamentalism is in the hands of women. The mullahs will be overthrown by women whom they have oppressed most.  This is why we say that women are the force for change in Iran.

She said: I would like to speak about one of the Iranian Resistance’s achievements. This is the first time a resistance movement has actually implemented women’s equality, particularly in political leadership. The presence of young Iranian women in the leadership of the Iranian Resistance attests to this desire and guarantees democracy and freedom in tomorrow’s Iran. It is an asset to our people for the future Iran.

On her prospects for Iran’s future, Maryam Rajavi said: Popular suffrage and the ballot box are the only source of legitimacy for any government to take power in tomorrow’s Iran. Therefore, we seek a pluralist republic relying on people’s votes.

We call for abolition of the death penalty. The Iranian Resistance espouses separation of religion and state, equality of the rights of all Iranian citizens with any faith and religious conviction. We recognize women’s equality in all political, social and legal grounds, particularly women’s equal participation in the country’s political leadership. We also promote free choice of clothing, freedom in choice of employment and place of work, women’s right to divorce. These are freedoms that do not exist under the present regime.

We seek a modern judiciary based on the principle of presumption of innocence, the right to defense in an open trial, and complete independence of judges and lawyers. All ethnic and national minorities make up the Iranian nation as a whole and they must enjoy equal rights; they must be equal before the law. The National Council of Resistance of Iran has adopted a plan for the autonomy of Iranian Kurdistan. And of course, we do advocate and strive for a non-nuclear Iran.