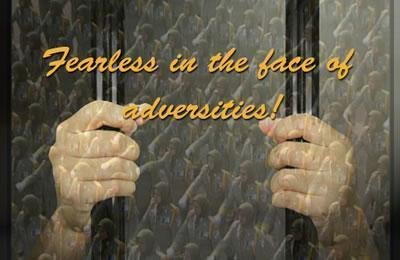 Fearless in the Face of Adversities!

I got to know Effat Ismaeli ever since I was transferred to Ghezel-hessar Detention Centre on July 8, 1982.

You could tell from her attitude and behaviour that she was a university student.

Her solid and reliable face showed confidence and determination with a smile that was extremely promising and encouraging.

Effat Ismaeli was born in 1959 and was a senior student of law before being arrested.  She was much disciplined, a woman who was constantly planning every moment of her daily life and always active even in difficult situations.

In the early months of 1982, the cellblock was very crowded and some 25 prisoners were detained in the same cell. So, we had to spend our days and nights together in such a compressed fashion in a small cell. Every day, when they opened the door of our cell for a short period of about 45 minutes, to serve food or for us to wash our face and hands and prepare for prayers, Effat was the first one to use this opportunity to do exercises, inspiring all of us to do the same and take advantage of every opportunity we come across no matter how short or small it may seem.  She taught us that we must strive to be productive and do something positive at all times.

In my very first encounter with her, she proved that she was a trustworthy woman on whom I could rely in any circumstances.

Effat was always one of the first people who was targeted and punished by Haji Davoud – the notorious torturer of Ghezel-hessar – because she was educated and very mature. And this reactionary misogynist torturer could not tolerate educated women. He used to say, “University students are the ‘brainies’ who lead others in prison.”

One of the things Effat used to do to revitalize the cell’s atmosphere was mocking the words of this absurd man.  It was for such resilient spirit that she ended up in solitary confinement in Gohardasht Prison in the same year (1982).

We became cellmates again in spring of 1987 at Gohardasht. The relocation coincided with the formation of the Iranian National Liberation Army, where women made up some of the army’s units.  We were all trying in every possible way to learn some news about the big development in the women’s movement.   One of those women who was tirelessly seeking the news was Effat.

One day, Effat told us about how women dressed in the army. We learned that they wore green dress shirts with shoulder-straps and a red scarf and that they marched every day and practiced military drills.

That’s when Effat also started wearing a piece of red cloth on her head while holding a stick in hand.  If we were allowed to go out for some fresh air or even if we weren’t allowed, she would still march around and practice her military drills.  One day we gathered and had a meeting where we decided to dress in a similar fashion in solidarity with the women of the army and to become uniform with them.

We told our families to bring us shirts with shoulder-straps and Kurdish pants; and that’s exactly what happened.

The first sets of clothes that entered the prison were almost all either green or gray shoulder-strapped shirts accompanied by Kurdish pants.  Effat was the first person who started dressing like the women’s army, wearing a red rag as a headscarf; the one who held a stick in hand and began marching. Whoever had received the clothes through their families had started following suit and marched behind Effat; following her moves.  And this was how, with the efforts of Effat Isameli, a small united force of resistant and firm women flourished in Ghezel-hessar Prison.

The prison guards did not notice the changes in our clothes until they realized that we no longer looked like the former prisoners who were first brought in.  They recognized this change one day while we were outside for our daily break; we looked uniform, similar to an army of strong and resistant women who were marching in the prison yard.

That’s how shoulder straps, the colors of green and gray, and Kurdish pants became prohibited in prison. In the following days, even our families would jokingly ask during their visits, “What have you done with your shoulder-straps that they are forcing us to remove them from the clothes we bring you?”

It was rather too late, because thanks to the efforts of Effat, we had organized ourselves into a unit and this image will forever remain in the history of women’s movement.

Effat always longed for the day when she could be free to join that army of steadfast women.  You could always hear her about how she would immediately join her fellow sisters as soon as she was liberated. Hence, much of her daily activities revolved around planning that day and the message could also be heard in her poems and hymns.

Effat and I spent plenty of time together; in June of 1988 we went on a month-long hunger strike together, followed by solitary confinement, and later on our transfer to Evin Prison which finally led to her execution during the massacre of 1988.

During the whole journey, I witnessed her leadership, perseverance, and dedication.  Whenever prison guards attacked our cell, she threw herself to the front to shield her sisters and prevent the guards from approaching her cellmates.

Then, came the days of the massacre and we were all left with only two options: surrendering to the regime or defending our identities as freedom loving women who were ready to kiss the gallows goodbye and convey the message to others to join the army of freedom and continue the fight.

Effat was among the first series of prisoners hanged in the course of the massacre. With her red scarf, she carved the path for the rest of Iranian women. And her stick has turned into the powerful torch held in the hands of women who are fighting hand in hand against the misogynist mullahs and defending their rights.

Change is soon to be expected in Iran and the overthrow of this regime will occur at the hands of the women of this land who have been suppressed for so long.

In her will, Effat addressed all Iranian people and wrote:

Fearless in the face of adversities… These hands have pledged themselves to God and People…Will stand steadfast for the freedom and deliverance until death stops me.  Let reactionaries shackle, torture, and execute us.  Our determination will not be impaired.  They are destined to be doomed, and we are the winners.

Let Effat’s path, her determination and strong will be the torch in illuminating the way for the rest of the oppressed yet resistant and resolute women.