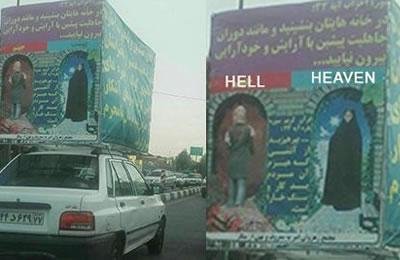 Iran: Women must stay home and not appear in public

Facing widespread defiance of Iranian women and girls, the clerical regime and its backward forces come up with more ridiculous ideas every day to force women to wear the veil.

One such absurd initiative by the paramilitary Bassij base affiliated with the “Association of promoting virtue and forbidding evil” of Qom has been pictured here.

It is a huge ad-box on the top of a car depicting a blonde hair woman in Hell and another woman covered with the head-to-toe black veil in Heaven.

Above the picture, it is written: “Sit in your houses and don’t come out with make-up and dressed up like you did in the old era of ignorance.”

The other side of the ad-box reads: “Honorable and faithful men would not allow their wives and daughters to go out wearing short skirts and makeup in front of strange men.”

The photo has been taken in the city of Qom, the power base of the mullahs, located some 120 kms to the south of Tehran.

Fereshteh Hamedani: I love this path, its difficulties and its sweet moments