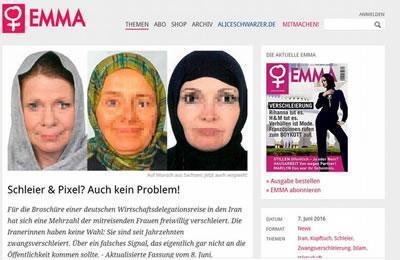 The visit to Iran by a 100-strong economic delegation from Germany between May 28 and June 2, 2016, has become controversial.

Eight of the 12 female members of the German economic delegation pictured in the published brochures have appeared in veil. Some politicians have criticized this measure.

A German MP told Bild magazine: “This is a harmful friendship for Iranian women.”

The women’s Journal, Emma, lambasted the measure and wrote: “What is the message of this measure by German politicians and major companies? They have published their business cards bearing veiled pictures. By doing so, they are emphasizing that they have no problems with the compulsory veiling of women, neither on paper nor in real life.”