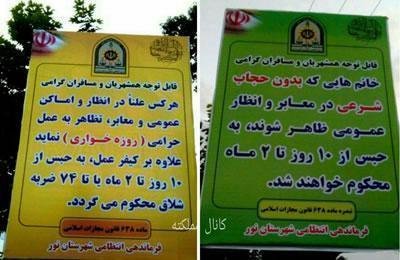 “Women who appear in public places without proper religious veiling, will be sentenced to imprisonment from 10 days to two months.”

This is the announcement on a billboard posted by the State Security Force in the northern Iranian city of Noor to intimidate Iranian women, in a bid to force them to do what they have not succumbed to in the past 38 years.

On the left, another billboard threatens people who eat or drink in public during the month of Ramadan with imprisonment and 74 lashes of the whip.

Iran: Women's taking photos cause of drying of rivers