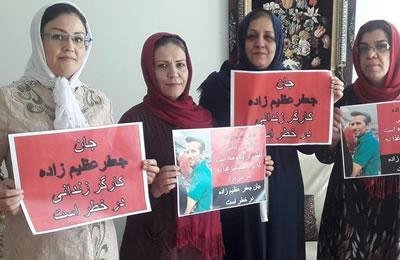 Iran: Women campaign to save life of hunger striking prisoner

Mrs. Sholeh Pakravan, a human rights activist who campaigns for abolition of the death penalty, visited the family of an imprisoned worker on June 14, 2016.

Jaafar Azimzadeh, is a labor activist and has been on hunger strike since April 29, 2016.

There have been several acts of protests over the past several weeks, expressing concern over Mr. Azimzadeh’s conditions and demands to save his life.

Ms. Parvin Mohammadi, another labor activist and representative of Iranian workers, was also present in this meeting.  Ms. Mohamamdi who was herself imprisoned a few months ago because of her activities in defense of workers, presently backs and supports Mrs. Azimzadeh in the absence of her husband.

Jaafar Azimzadeh is the secretary of the Board of Directors of the Iranian Workers’ Free Union and has been sentenced to seven years in prison for campaigning to increase the minimum workers’ wage.

Ms. Pakravan lost her courageous daughter in November 2014 when she was unjustly executed by Rouhani’s judiciary for defending herself against rape by an Intelligence Ministry senior official, arousing tremendous outrage worldwide and in the country.