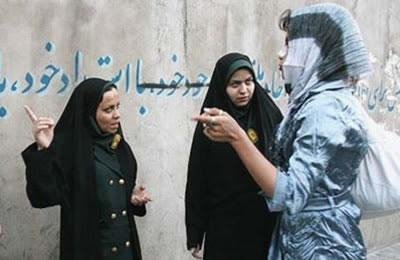 As the Iranian regime becomes weaker and more instable every day, the regime’s leaders emphasize more on the political nature of compulsory veiling and suppression of women in Iran

and their impact on the survival of the ruling regime.

At the same time, the regime has stepped up suppression of women more than ever before under the pretext of the month of Ramadan and has set up new units who will flog mal-veiled women on the spot.

Makarem Shirazi, a senior religious authority, declared, “Today, the issue of Hijab (veiling) has turned into a political problem for the country. Unfortunately, it is not being observed as in the past. We must try to preserve this symbol in our society.”

The Friday prayer leader of Isfahan, described any failure to arrest improperly veiled and non-veiled women as “treason”. He said: “If you do not arrest improperly veiled women who take pictures at Ramadan’s dining table, you commit treason!… People have become insensitive to women who do not observe their veiling behind the wheels. Sometimes, one sees a mal-veiled woman standing next to a man, selling sandwiches in a shop. The operation license of such shops must be revoked.

“In some websites, they post pictures of lunch tables in the month of Ramadan, or they post their pictures without the veil. If the Communications Company does not identify and arrest these people, it commits treason.”

In Ahwaz, the Friday prayer leader announced the activation of special monitoring units who would flog mal-veiled women who defy the verbal warnings in the streets.

Haidari said, “An inspection delegation for inspection will start its activity in city squares and main avenues in the presence of a judge. If anyone fails to obey the verbal warning of inspectors, she would be turned into the judge who will then issue a verdict for her and the religious decree would be implemented.”

Iran: Atena Daemi's trial to be held in two weeks