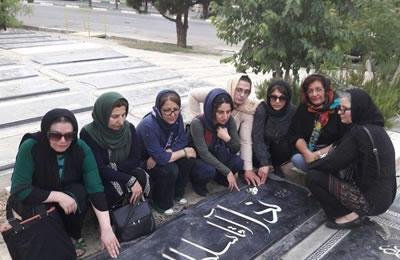 Ms. Hajar Rostami commemorated her daughter on June 19, 2016, at her tomb while accompanied by a number of other bereaved mothers and relatives of those slain in the 2009 uprising.

Neda Agha Soltan was one of the thousands who were killed during the 2009 uprising. She was shot dead in Tehran’s Amir Abad district on June 20, 2009. A short film taken by a mobile phone and posted on the internet which showed her last moments, dying with her eyes open shocked the world and opened their eyes to the Iranian people’s deep-rooted opposition to the ruling regime. Thus Neda became the symbol of the 2009 uprising.