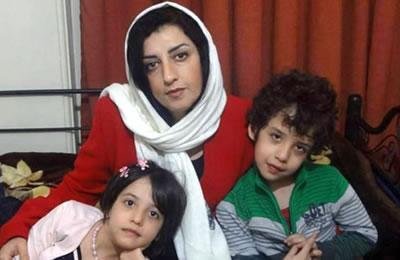 Political prisoner Narges Mohammadi who is currently detained in the women’s ward of Evin Prison, started a hunger strike on June 27, 2016, in protest to being deprived of having telephone contact with her children.

She has written several open letters to the highest judiciary officials about her treatment by prison authorities.

The Vice President of the League of Human Rights Advocates in Iran also wrote about her hunger strike: A year ago, in the same hot summer days, my two little children left the country for France. It was their birthday and I asked to have a phone-call to congratulate them which they did not allow. Contrary to all other prisons, prisoners of the women’s ward of Evin are deprived of calling their families. Making phone calls is prohibited.

I have had a strange experience over the past year in prison. Despite my recent 16-year prison-sentence, being imprisoned has not changed my mind but further strengthened my beliefs in defending human rights. At the same time, it has not reduced any of my suffering for being separated from my beloved children.  Now, as it is written in my decree, I am behind bars in my country for being a human rights activist and a feminist and for opposing the death penalty.

Not only they consider my defense of human rights as a crime, but bitterer is their denial of my being a woman and a mother.

So, despite my desires and my physical power, I have no choice but to cry out my “being a mother” by announcing that I am going on hunger strike. As women and mothers, our punishment is imprisonment, not being deprived of hearing the voice of our loved ones.