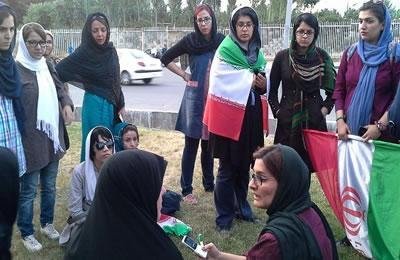 The third week of the International Volleyball League tournaments is going to be held July 1-3, 2016, in Tehran.

Meanwhile, a notice on the website selling the tickets reads, “Women are not allowed to buy tickets.”

Women’s exclusion from spectators of national volleyball team games was reported by the media three years ago, when more than 1000 women were prevented from entering the stadium to watch the Japan-Iran games.

Two years ago, before the 2014 Volleyball World Cup, the secretary of Iran’s Volleyball Federation announced that women were not allowed to enter the stadium. Subsequently, a group of women gathered outside the 12000-people Azadi Stadium to protest the ban. Their protest was violently dealt with and a number of women were arrested. (State-run ISNA news agency – June 15, 2014)

The next year, during the 2015 games, the regime’s interior minister announced again that women were prohibited from entering stadiums.  (State-run Faradid Website – June 16, 2015)