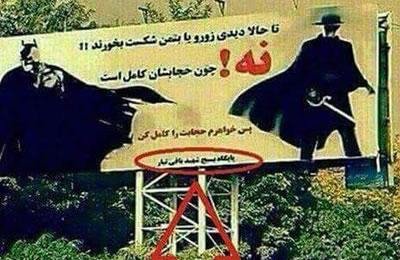 The billboard pictured in this piece is one of the masterworks of the Revolutionary Guards Corps and Bassij.

By posting this billboard bearing the images of Batman and Zorro, at Tehran’s Haqqani Expressway, the IRGC Bassij force resorted to a stupid rationale to convince Iranian women to observe the compulsory veil. The billboard reads:

“Have you ever seen Zorro or Batman losing in any battle? NO! Because their covering is complete. So, my sister, observe your veil properly. Signed: Shahid Baghitabar Bassij Base”

Of course, one should recommend this complete veil and covering to the Iranian regime’s troops in Syria who are suffering heavy casualties these days in defending criminal Bashar Assad.