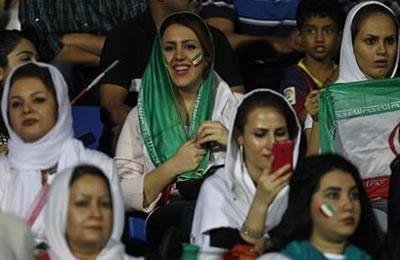 Iranian women were banned again from freely attending Tehran’s Azadi Sport Complex to watch the Iran-Serbia match on July 1, 2016, despite promises made by the Iranian

Federation to allow female spectators into the stadiums where the games take place.

AP reported: Iranian women report they are being barred from attending a major volleyball tournament featuring the Olympic-bound men’s national team, reigniting a debate about whether Iran should be allowed to host international matches.

Despite a commitment from volleyball’s world governing body that women would be able to attend this weekend’s World League tournament at the Azadi Sport Complex in Tehran, Iranian women who have pushed to make sporting events more open say they haven’t been able to purchase tickets despite multiple efforts to buy them online.

AP added: The International Federation of Volleyball, released a statement noting that the Iranian federation said Friday’s matches sold out within five minutes, and that 466 of the 5,000 tickets were allotted for a section set aside for women. The area of seats, shown repeatedly on the livestream, didn’t appear that large.

Meanwhile, the state-run Asr-e Iran website reported that “women’s attendance in the stadium was not done through sale of tickets but the Volleyball Federation seems to have handpicked those allowed in.”

Women are banned from attending male-only sporting events in Iran but many women are pushing to change that practice.