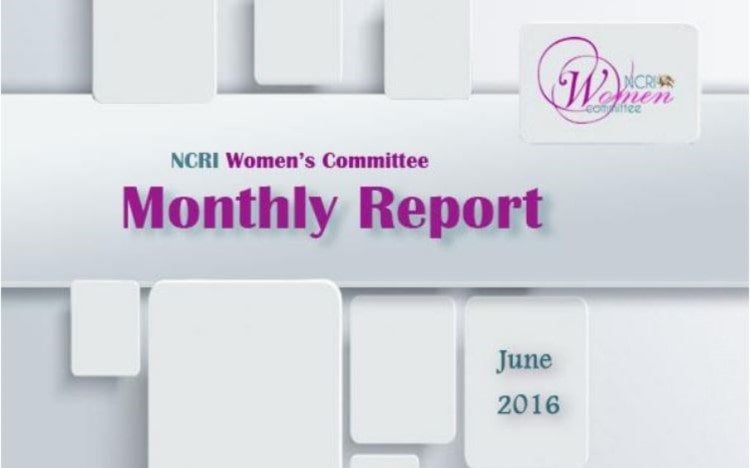 June was marked with the execution of a woman and continued mistreatment of women political prisoners and prisoners of conscience.

Nargess Mohammadi went on hunger strike to demand her right to call her children on the phone.

Maryam Naghash Zargaran was returned to prison from hospital, after a short medical leave which left her treatment incomplete. And Fahimeh Esmaili, a political prisoner, was badly beaten up in detention in Yasouj Prison.

Group arrests in raids on private parties, the arrest and imprisonment of religious minorities, and detention of dual nationals continued this month.

The State Security Force launched a number of new campaigns in cities across the country against women who do not properly observe the government’s mandatory dress code. Nevertheless, women continued to voice their protest to the government policies and were a major part of most protests that took place in the month of June.

An unidentified woman was hanged June 2, 2016, in Qazvin’s Central Prison, after two years of imprisonment.

The total number of women executed under Rouhani thus amounted to 68.

Fahimeh Ismaili, a political prisoner from Ahwaz, was badly beaten up on Thursday, June 2, 2016, in Yassouj Prison and went unconscious.

The wave of group arrests and raids on private parties continued in Tehran and other cities across the country, in the month of June.

On June 3, 12 young women were arrested in a garden in Alborz Province.

On June 4, security forces raided on a house and arrested 30women in Tehran.

Six women were arrested in Tehran’s Saadat Abad district on June 5, and another 21 persons arrested in a party on June 11. They were charged with mal-veiling.

An Iranian-Canadian professor was arrested in Tehran. Homa Hoodfar was previously arrested on June 6, 2016, a few days before her planned return to Canada. Her passport was taken, and Hoodfar was interrogated.

Her lawyer and family have not been allowed to see her, nor has the cause of arrest been explained to them. She is in prison now.

A new report from the Women’s Prison in Qarchak, Varamin, shed more light on the abysmal living conditions of prisoners in this prison. The report indicated that a large number of women have been detained in a small area with horrible hygienic conditions. Shortage of beds forces women to sleep like sardines on the floor. Prisoners are not given proper food or medicines. The absence of medical care for the sick, causes dangerous epidemics in prison and has given rise to high number of prisoners contracting Hepatitis and AIDs.

Other important developments were as follows:

Political prisoner Narges Mohammadi started a hunger strike on June 27, 2016, in protest to being deprived of having telephone contact with her children.

In a letter explaining about her hunger strike, she wrote: Contrary to all other prisons, prisoners of the women’s ward of Evin are deprived of calling their families. Making phone calls is prohibited.

Afsaneh Bayazidi, a student from Boukan (Iranian Kurdistan), has been detained under torture in the Intelligence Department’s prison in Orumiyeh.

After two months of having no information on her whereabouts, Ms. Bayazidi’s mother was informed on the phone on June 17, 2016, that her daughter is held in Orumiyeh’s detention center without undergoing any trial.

Ms. Bayazidi was arrested at home on April 24, 2016, by security forces who did not show any warrants, but ransacked the house and impounded her possessions.

Prisoner Nahid Gorji, who suffers from diabetes and heart complications, has been deprived of medical care and receiving her much needed medications.

The 50-year-old detainee has been sentenced to five years in prison for her activities in the social networks on the internet. She has been detained in Vakilabad prison of Mashhad since May 8, 2016.

Roya Saberi Nobakht, imprisoned for her activities in the Facebook, is detained in prison despite her critical health conditions.

Prison authorities have provided no medical treatment for her despite repeated convulsions.

Roya Saberi is a British-Iranian citizen arrested in October 2013 by the Iranian Revolutionary Guards.

He said, “We have allocated vehicles to sisters promoting virtue and prohibiting evil. They have given warnings to over 1000 women so far to fix their veils”.

Controlling the beaches to prevent women from swimming was also another part of the plans in June.

The State Security Forces commander in the Northern Province of Gilan announced that a new plan was being implemented in 140 points along the province’s beaches and recreation areas. He said they deploy plainclothes agents and the paramilitary Bassij forces in this plan.

In another development regarding social ills affecting the women of Iran, Rouhani’s Labor Minister admitted that the rate of addiction among women had risen from 4 to 10 per cent.

Rab’ii explained, “There are 1142 rehabilitation centers for addicts across the country. The proportion of women in these centers compared to men is about 10 per cent, which could be generalized to the entire society.”

In another tragic development, a new report published in June indicated common practice of the sale of newborn infants, reflecting the spread of poverty among women.

The report indicated that homeless women who sleep in cardboard boxes in the streets go to hospitals in central or southern Tehran for delivering their babies. Once their babies are born, they sell them between 1 to 2 hundred thousand toumans.

Fatemeh Daneshvar, member of Tehran’s City Council, pointed out that another rising phenomenon in Tehran is the pregnancy of girls who run away from their homes in other cities. When they get pregnant, their babies are sold at a higher price.

Daneshvar stressed that they have monitored five hospitals for eight months and found out that 150 addicted babies were born just in these five hospitals, and it must be concluded that the actual number of babies born with addiction, should be considered much higher.

Another alarming report on social ills indicated that at least 10,000 young women in Tehran engage in prostitution because of poverty, 35 per cent of whom are married.

A specialist in the field told the state-run Mowj news agency, wrote on June 11, 2016: 30 per cent of these women have high-school diploma and higher, 50 per cent have not finished high-school and only a small percentage are illiterate.

In the month of June the suppression against ethnic minorities continued:

New Christian convert, Laila Abdinejad, was arrested on June 5, 2016, at her residence in Mehrshahr, Karaj, west of Tehran. It is said that she is imprisoned in Evin Ward 209, but she has had no contact with her family since she was arrested.

Another Bahaii woman was arrested after one month of harassment, intimidation and ultimate shutdown of her business.

Ms. Sara Akhlaghi is a Bahaii residing in Shiraz. She was summoned to court on June 16, 2016, to sign papers in order to have her store unsealed. Ms. Akhlaghi advertised her store’s wedding gowns on the Instagram.

However, internet security agents hacked and blocked her account for “dissemination of indecent photographs and inciting and encouraging others to breach public decency.”

Despite the numerous campaigns led by the Iranian regime’s authorities to subjugate Iranian women, they continued to stage their protests in the month of June.

Families of fire-fighters in the city of Rasht, capital of the northern Gilan Province, held a gathering on June 26, 2016, in protest to non-payment of past-due wages of fire-fighters. The protest coincided with the Iftar ceremony of the city’s mayor where he hosted 3000 people. The protesters said these luxury parties are held while their wages are not paid and they are living below the poverty line.

The family of the jailed worker Jaafar Azimzadeh and a number of teachers and workers, held a gathering outside Tehran’s Evin prison on Saturday, June 11, 2016. They protested the authorities’ ignorance of Azimzadeh’s demands leading to his lengthy hunger strike which seriously jeopardized his health.

Fortunately, these gatherings and an extensive campaign for the release of this labor activist reached its goal and he was released from jail.

A number of retired teachers, many of them women, staged a protest outside the Administrative Justice Tribunal in Tehran on June 8, 2016.