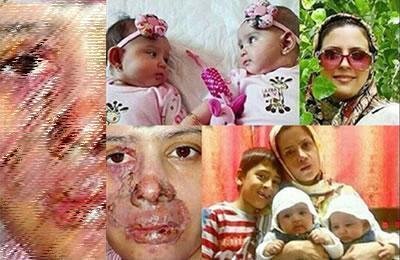 Iran: Do hospitals treat women or subject them to violence?

Iran: Do Hospitals Treat Women or Subject Them to Violence?

It was January 17, 2016. Zahra was taken to Chamran Hospital to deliver her baby. After she delivered her twins, she needed some Oxygen.

A nurse put an Oxygen mask on her face, but suddenly Zahra began screaming and the smell of burnt flesh filled the operation room.

Zahra had been given a combination of CO2 and Nitrogen gases to breathe instead of Oxygen.

Zahra is 32 and the twins were her second delivery. As a result of respiring the wrong gas, her mouth, nose, eyelids and lips were burnt. For quite a long time, she was not able to breathe without the help of machines. For months, she was not able to eat and drink, or talk.

Zahra’s beautiful face was burnt without the hospital or the operating doctor accepting any responsibility for the damage done.

However, Zahra was asked not to talk to the media about the incident, promising to help her recover from the injuries.

After delivering her twins, Zahra was operated on repeatedly. The burns have damaged not only her face, but also pierced a hole in her esophagus and trachea which was later operated on. Her eyelids were also operated on several times to prevent drying up of her eyes.

Indeed, what else could be expected in a society where women are, at best, considered half of men?

Medically, this was a crime. From a women’s rights standpoint, this is a case of violence against women.

The physician who was in charge of this operation must have been stripped of his license and subsequently put on trial. However, because of the misogynous laws of Iran, women are abandoned without any support in the law or from the government.

As opposed to Zahra, Dr. Mohammad Ali Hellisaz, the head of Chamran Hospital enjoys much government support. Almost a month after this incident, he told the media, “I don’t know why this has turned into news in the cyberspace! The burns were light. The mother feels OK and she has been released from the hospital.”

Looking at the innocent face of Zahra, reveals the depth of the crime.