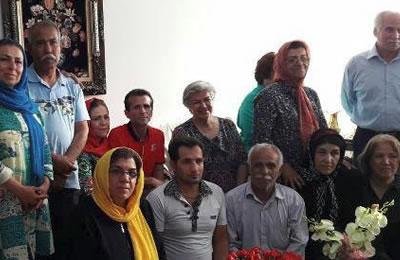 They stressed on their solidarity and support for the prisoners and their families. In a short report on this visit, a mother wrote:

In our visit, we said, it is important to emphasize the movement’s independence from the ruling government because the government always attempts to deviate protest movements through different means.

We, the mothers of martyrs and political prisoners, have continued to persist on three minimum demands, i.e. the release of political prisoners and prisoners of conscience, elimination of death penalty, and prosecution and punishment of the perpetrators of the crimes committed under the Islamic Republic. We also believe that to achieve these objectives, we must endeavor to ensure freedom of thought and expression, elimination of all forms of discrimination as well as the separation of religion and the state. The main cause of such inequalities in the country is embedded in the foundations of the ruling regime and its anti-democratic and discriminatory laws.

We are confident that, so long as this structure and its laws have not changed and the minimum democracy is not practically implemented, we would continue to have political prisoners and killing of people for their dissent would continue to be sanctioned.