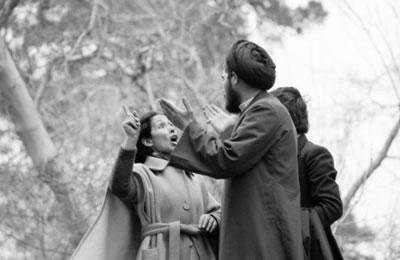 Maliheh Nikjoumand, movie, theater and television actress, died after a few days of hospitalization at the age of 83. She had fallen down and experienced brain hemorrhage a few days before.

Ms. Nikjoumand was born in Isfahan in 1933. She started her carrier in the 50s and starred in many popular Iranian TV serials and movies.

Maliheh Nikjoumand has two historical pictures in the women’s historic protest against mandatory veiling in 1979. The photos picture her on the top of a minibus protesting against a state-backed mullah.

Explaining about the photos, she said in autumn 2015, “On that day, a rally was held near Tehran University. We used to live near the university. Since a few days before, thugs and hoodlums had begun rampaging the streets with chants of “either the veil or a hit on the head.” They pushed thumbtacks into the forehead of young girls. Hijab had not become legally mandatory yet, but there were clashes between women and the club wielders.”