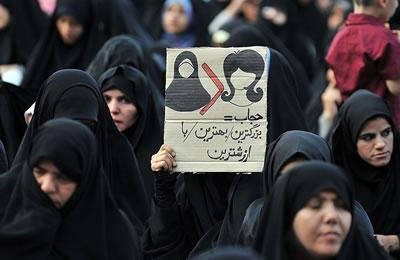 Iran: The week of hijab leads to more repression of women

The Iranian regime holds an annual weekly ceremony to promote repression of women under the name of  “the week of virtue and Hijab (veil)”.

This year the Cultural Council held 10 different gatherings across the Capital and in 400 locations all across the country. Thes gatherings were organized by the Bassij Force and the Organization of Islamic Propaganda.  The gatherings provided new opportunities for the regime’s officials to further stress on the need for the suppression women under the pretext of hijab.

The social deputy for the Judiciary said, “We are moving from mal-veiling towards unveiling. The Judicial system is obliged to deal with those who promote mal-veiling and unveiling.” (Mohammad Bagher Olfat, state-run Arman Newspaper – June 22, 2016)

The head of the Department of Cultural Research said, “Due to the importance of the issue of Hijab, there must be an institution and an authority higher than a ministry, such as a branch, to enforce the duty of promoting virtue and prohibiting evil.” (Mullah Rashad, state-run IRNA news agency – July 12, 2016)

Meanwhile, the state-run Dana website recalled the punishment for mal-veiling under the mullahs’ Constitution and wrote: “The first law adopted on women’s clothing was article 102 of the Penal Code ratified  in 1983. The article indicates, ‘Women who appear in the streets and in public without wearing the religious veil will be punished by up to 74 lashes of whip’.”

In this way, the Week of Hijab ended with another step is escalation of repression of women and enforcement of harsh punishments under the pretext of the compulsory veil.

Iran: Official calls for dealing with violators of compulsory veil