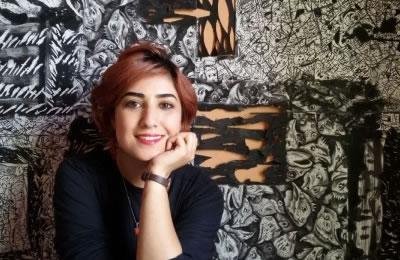 In an exclusive interview with the Washington Post, published July 15, 2016, former political prisoner Atena Farghadani thanked everyone who had endeavored for her release. “I am grateful to all those whom I don’t know and to whom I owe my freedom.”

Atena said she did not know about the international campaign for her freedom when she was imprisoned in the Qarchak Prison of Varamin, but was subsequently informed about them in Evin by her attorney, which boosted her morale.

As for her artistic activity, she told the Washington Post, “At the moment, since I’ve arrived at the certainty that there is miracle lying in the art of drawing and painting, I’m more determined to continue doing it than ever.”

As for her sentence of 12 years and nine months in prison, Atena said that in the beginning it was unbelievable for her.  “At first, I had a hard time accepting the sentence, but then I thought I could use this time, as much as possible, to draw and have an opportunity to put an exhibition of my works after my release. I considered prison my home for the next 13 years.”

She said the hardest and most bitter days during her captivity were the days she had to make faces for her parents from behind the glasses in the visitation cabins to make them laugh.

Ms. Farghadani concluded her interview by recalling the situation of women in Qarchak Prison. She said the inhumane treatment of these women had the most damaging effect on her. She added, “I would like to reflect the wishes of other women imprisoned in Gharchak — most of them longed for cool drinking water… so many of them missed a hot shower! Many of them [condemned to] death sentences wished to plant something that wouldn’t wither from the salty water and [to] see that plant — to leave a living mark before departing from this life.”

Iran: Thirty, including a woman, executed in one week