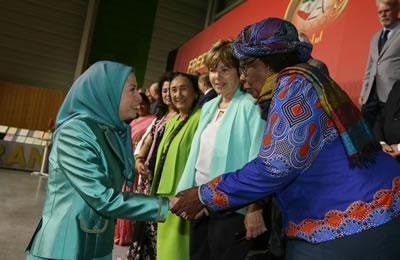 Over 100,000 Iranians and supporters of the Iranian opposition gathered on July 9, 2016, in Le Bourget, Paris, to mark the anniversary of the beginning of the Iranian Resistance against the clerical regime in Iran.

The keynote speaker to the rally was the President-elect of the Iranian Resistance Maryam Rajavi who vowed to continue the struggle until a republic based on separation of religion and state, democracy and gender equality is established in Iran. She called on the West to abandon the policy of appeasement which emboldens the Tehran regime to intensify the suppression of the Iranian people while continuing the policy of exporting terrorism to the region.

Over 600 distinguished personalities and officials from 80 countries in the five continents participated in the gathering to express their solidarity with the Iranian people’s struggle for freedom. Women made up a large number of the participating delegations and 22 prominent women spoke to the gathering on their behalf.

From East Turkmenistan, Rebiya Kadeer, leader of the Chinese opposition, President of the World Uyghur Congress and Noble Peace Prize candidate, also addressed the Iranian opposition’s gathering when she said, “We share common struggle. We salute people of Camp Liberty. We are under threat of extremist Muslim. And part of the solution is in front of us, Maryam Rajavi, who is a Muslim woman with a tolerant interpretation of Islam… She reflects the true essence of Islam. Peace and liberty. Her respect for tolerance and deep compassion are true pillars of Islam.”

In her remarks to the gathering, Dr. Ranjana Kumari from India, director of the Centre for Social Research, and winner of the 2015 Lotus Leadership Award, said: “I don’t think any power around the world can stop your struggle… Your struggle for freedom is very important for the world. Your message is spreading everywhere, that when you remain steadfast, you will win. I salute you and salute Maryam Rajavi for her courage and for her leadership of this struggle. The day is not far when you will be victorious.”

From Nepal, Ms. Bandana Rana, 2016 UN CSW Women of Distinction Awardee, head of the World Network of Shelter for Women, and member of the UN Convention on the Elimination of all Forms of Discrimination Against Women (CEDAW), told the gathering: “I share the pain of women in Iran. I declare my solidarity with your movement. I have seen an amazing leadership and great energy and power in women in your movement… Let us make sure that the women of Iran are not left behind in our quest for equality by 2030; we can and we must.”

From Zimbabwe, Senator Sekai Masikana Holland, leader of the democratic movement against Mugabe, founding member of Australia’s Anti-Apartheid Movement, winner of the Sydney Peace Prize 2013, and French Legion of Honor (Legion d’Honneur) 2011, also declared her solidarity with the women of Iran and their struggle for freedom. “By participating in the rally, I want to ask the African Union and the United Nations and the anti-Apartheid movement survivors to turn their full attention to the struggle of Iran. We extend our solidarity with Iranian women against religious fundamentalism.”

Maria Candida Almeida, deputy Prosecutor General of Portugal also addressed the gathering. In part of her remarks, she said, “I admire Madam Rajavi as a woman leader who has persistently led this hard struggle for freedom and women’s rights in Iran… As a Portuguese woman who deals with the rule of law, on behalf of my people I would like to express my deepest solidarity with your struggle for justice, democracy and women’s rights in your country.”

In part of her speech to the gathering, Frances Townsend, Homeland Security Advisor to United States President George W. Bush (2004-2008), said: “I look out at the women here today and I am so proud to stand with the women of this movement, with the women in Camp Liberty… I am proud to be your voice and I stand with you… You are the future of Iran. You are the voice of Iran.”

Kerry Kennedy, daughter of Robert F. Kennedy and President of the Robert F. Kennedy Center for Justice & Human Rights, also addressed the meeting. She said, “The largest group the mullahs target makes up fully half the population of the country and that is women. There has been a horrific increase in acid attacks against women perceived to be in violation of the dress code…. Let the mullah tyrants tremble and shrink as we join with the people in Iran and speak truth to power. It is time to free Iran.”

Anthea McIntyre, MEP from UK, said in her remarks: “As an MEP, I would like to see any future relations with Iran conditioned on respect for human rights and halt to executions. As a woman I am especially concerned about the situation of women in Iran… I find it sickening to see women officials discard their normal clothes just to appease the mullahs and wear the dress code that is imposed on the women of Iran against their will… The people of Iran deserve so much better. And that is why we stand behind Maryam Rajavi.”

From France, Rama Yade, former advisor to Foreign Minister for human rights and deputy leader of the Radical Party, Senator Evelyne Yonnet-Salvator, and Sylvie Fassier, Mayor of Le Pin; Ingrid Betancourt from Columbia, former presidential candidate; Dr. Meredith Burgmann from Australia, former president of the Senate and a senior member of the Labour Party and president of the New South Wales parliament; Laurence Fehlmann Rielle from Switzerland, Member of the Swiss Assembly; Judy Sgro from Canada, Member of Parliament; and Malgorzata Zwiercan from Poland, Member of Parliament and chair of the Elderly Committee; also addressed the gathering.