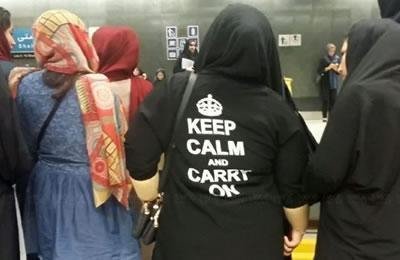 The spokesman for the State Security Force announced that they will deal with import of manteaux with writings on them.

Montazer-ol Mahdi said, “Certainly, most of such manteaux are not imported through official entries. Therefore, at the first step, we will deal with them as smuggled stuff.”

“The SSF has demanded the meaning of the writings on the manteaux. The manufacturers and distributers of such clothing are going to be informed that wearing these manteaux is prohibited and thus put an end to this process,” he added.

So much for opening of Iranian society after the nuclear agreement. The Iranian regime is so fragile that it cannot tolerate even the writings on clothing, let alone the minimum basic freedoms and improvement of people’s economic and human rights.