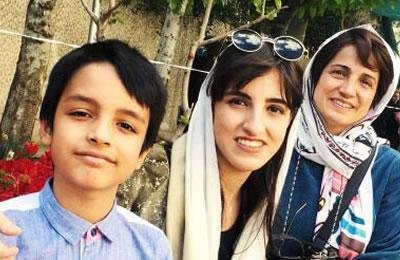 The daughter of a prominent human rights lawyer has been banned from leaving the country.  The Department of Passports did not issue a passport for Mehraveh Khandan based on instructions received from the Ministry of Intelligence.

Mehraveh Khandan is the 17-year-old daughter of Nasrin Sotoudeh.

This is the second time she is banned from leaving the country. The first time, she was only 12 when forbidden from travel abroad.

Nasrin Sotoudeh spent three years in prison. She spent time in solitary confinement and went on several hunger strikes in protest of the inhumane prison conditions and the 2012 travel ban imposed on her husband and young daughter. One of the hunger strikes lasted 49 days.

As she wrote in a letter in 2012, Ms. Sotoudeh believes that like any other child, her daughter has the right to live free from fear and intimidation at this age. She said: “Punishment of children is absolutely unlawful, let alone levelling political punishment against them for their parents.”