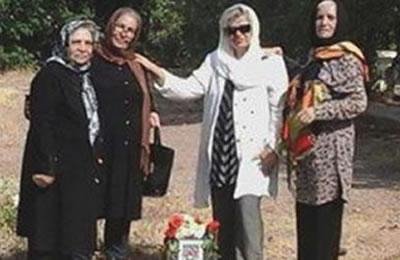 Mansoureh Behkish, a human rights activist and a relative of political prisoners massacred in 1988 in Iran, announced that she and her friends commemorated the victims of the 1988 massacre in Khavaran cemetery.

Almost 30 years past this horrible crime against humanity, Khavaran where many of the victims were buried in mass graves remains under tight control of security forces. However, many families and human rights activists risk their own security to continue their annual tribute to Iran’s best children who gave their lives for freedom.

Ms. Behkish wrote, “On July 22, 2016, we spent an hour in Khavaran laying new flowers on their graves and commemorating them. Then we sang the Khavaran anthem.”

Ms. Behkish was arrested and interrogated twice in 2011 and 2012 for paying tribute to her loved ones at their graves. In 2009, as she intended to leave the country, she was informed at the airport that she is banned from leaving the country and her passport was confiscated.

She says, “My sister and brother-in-law as well as my four brothers were all executed during the 1980s. (The government) gave us neither their bodies nor the address of their graves not even their last wills. But later, we found out on our own where they had been buried.”