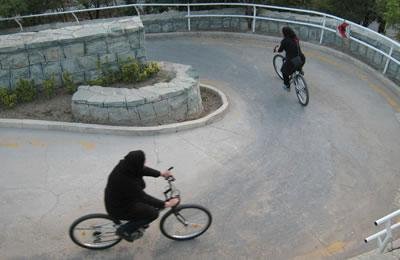 The Independent, by Lizzie Dearden

A group of women has reportedly been arrested for riding bicycles in Iran and made to sign pledges not to repeat the “violation”.

They were planning to participate in a cycling event in the north-western city of Marivan when police told them a new government directive had barred women riding bicycles in public.

The opposition National Council of Resistance of Iran said officers ordered them to sign written pledges vowing not to repeat the “unlawful violation” and took several women who protested into custody.

Female cyclists have long been a subject of controversy in the country, where they risk being punished for flouting modesty laws imposing strict dress codes in public.

Official signs appeared in May saying “bicycle riding for women is prohibited” in public walkways and police chiefs have previously warned that women caught cycling would be prosecuted.

Some parks have gender-segregated cycle lanes but in 1996 a mob of around 20 Islamists attacked women using one such facility in Chitgar Park, Tehran.

Without a defined penalty in Iran’s legal code, officers have previously used dress laws and other alleged offences including being in the company of unrelated men to harass female cyclists.

It is illegal for women to go out in public without wearing headscarf or “modest” clothing in the country, where thousands of undercover agents and morality police patrol the streets to check for violations.

Farideh Karimi, an activist from the National Council of Resistance of Iran (NCRI), said restrictions on women’s freedoms were being “stepped up” under President Hassan Rouhani’s government.

“With each passing day the mullahs’ regime is further infringing on the basic rights of women which they had fought hard to obtain,” she said.

“Hopes for an improvement of women’s rights in Iran which some had advocated at the start of Mr Rouhani’s tenure as President are a mirage.”

In a report issued last week, the Foreign and Commonwealth Office said the human rights situation in Iran had worsened in many respects despite the President’s pledges to improve freedoms.

It cited laws going through the Iranian parliament, drafted by Supreme Leader Ayatollah Ali Khameni that would limit access to birth control and force women into having unsafe clandestine abortions.

One bill being debated proposes discrimination against unmarried female job applicants and makes divorce more difficult, even in abusive relationships.

International attention was drawn to the hardship faced by women trying to play or watch sport in Iran after a British-Iranian woman was jailed for trying to attend a men’s volleyball match.

Amid global condemnation over the incident, the government partially repealed a ban on female spectators in sport stadiums – but only for events not considered too “masculine”.