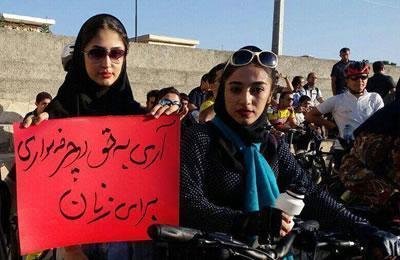 In a march with bicycles on Tuesday, August 2, 2016, the people of Marivan (Iranian Kurdistan) carried placards protesting the State Security Force’s ban on women’s bicycling and declaring it unlawful.

In the mean time, some 1,400 Kurdish civil activists issued a joint statement calling the newly imposed ban on women’s bicycle riding unlawful and a violation of women’s rights which must be ended. “Today, violence against women in Marivan is alarming. We are witnessing further obstruction of women’s activities, inciting an athmosphere which undermines women’s rights.”

Women’s athletics was declared un-Islamic after the 1979 revolution in Iran. Until the mid-80s, no news of women’s sports were ever broadcast by the media. Later, only short news were broadcast with no images. The mullahs have used every opportunity over the years to underline that women’s sports are not permissible.

Iran: Women in solidarity, "Keeping our heads up"