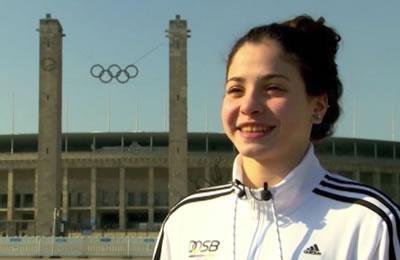 Swimmer Yusra Mardini is among 10 refugees competing under the Olympic flag in Rio. She won her preliminary heat in the 100-meter butterfly Saturday, August 6.

Mardini will compete in a second individual event Wednesday when she swims the women’s 100-meter freestyle.

Mardini was a competitive swimmer in Syria until she fled the war with her sister last August and survived a hazardous crossing on the Aegean Sea to reach Europe.

The Mardini sisters had been among Syria’s brightest swimming stars and their family had been moving around to avoid the fighting so they could continue swimming. But the war intensified and eventually the decision was made to leave altogether.

The sisters joined a wave of Syrian refugees who left Damascus last summer. They made their way to Lebanon and then Turkey, where they paid smugglers to take them to Greece. Their first attempt was thwarted when Turkish coastguards drove their boat back so they tried again, boarding a small inflatable dinghy at dusk.

About two years ago, Mardini was swimming to save her life and others. She was one of 20 refugees crossing the Mediterranean Sea in a boat when the motor stopped running.

They dived into the water with one other passenger and pushed the boat to the shore. Everyone on board was saved.