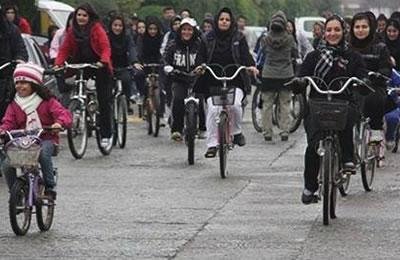 Two young women were arrested on Tuesday, August 9, 2016, in Marivan, in the western Iranian province of Kurdistan.

The State Security Force announced that the arrests were made because “women’s bicycling in public places is banned.”

The two girls were identified as Salah Arefi and Sharareh Mahmoudi.

In another development, eyewitnesses said that on the Clean Air Tuesday where people ride bicycles instead of cars to protect the environment, security forces, the police and plainclothes agents armed with batons were extensively present on the route from the city’s stadium to the Zaribar Lake.