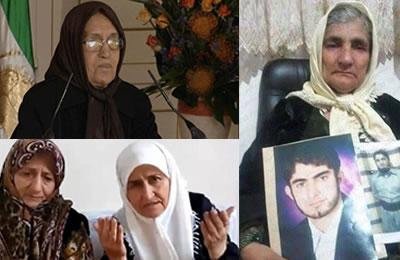 Expression of solidarity with the families of the Sunni, Kurdish political prisoners executed by the clerical regime continues.

Mrs. Zahra Nowroozi (best known as the mother of Rezaii’s) sent a message to the mothers and families of the fallen Sunni prisoners on behalf of mothers of the Iranian Resistance members who have given their lives for freedom.

Mrs. Nowroozi who has lost six of her children under the Shah and Khomeini regimes, expressed the mothers’ sympathy and solidarity, and condoled the bereaved mothers and families of the “25 valiant and freedom loving children” of the people of Iran, the Sunni community, political prisoners and all the people of Iran.

She stressed in this message, “The struggles and sacrifices of Iran’s children will continue and never end for the overthrow of the clerical regime. At the cost of their lives, the 25 Sunni heroes showed their torturers, that the people of Iran will never give up under oppression of this corrupt regime and will not relent their struggle until this regime is overthrown. We, mothers of PMOI martyrs, declare our solidarity with and support for the mothers of these martyrs. We call on all the people of Iran to rise up and struggle for regime change.”

Also, the mother of Ayyoub Bahram Zehi, a Baluchi political prisoner, wrote a letter to Shahram Ahmadi’s mother, stressing on the need to stand firm against the regime. She wrote in this letter, “When I heard about the execution of the 22 young Sunni, Kurdish prisoners, I could help but go back in time. I remembered that on October 26, 2013, sixteen young Sunni, Baluchis were executed en masse, and one of them was my son, Ayyoub.”

She continued, “Rest assured that your Shahram’s and our Ayyoub’s are now in the Paradise. The enemies should not see weakness in the mothers of Sunni martyrs. The history will not forgot the courage of these men as it will never forget the cruelty of these tyrants.”

Simultaneous with the anniversary of the massacre of political prisoners in 1988, a group of women political prisoners detained in Evin Prison also sent a message on the execution of the Sunni prisoners. They wrote, “The Iranian regime continues its suppression and arrests, as well as torture and execution of its opponents. Their demagoguery has nothing to do with Islam or Shiism… We can see that the Islamic regime and its suppressive machine has stood against all of us and suffocates the voice of all dissidents… This regime cannot be reformed.

“We, a group of woman political prisoners, condemn such mass executions and we call on international organizations and the freedom loving people of Iran to follow up on the trial of perpetrators of these killings, receiving the indictments of those executed, and on putting an end to all forms of restrictions imposed on freedom of expression in Iran.”