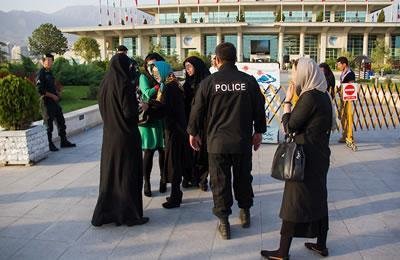 Tehran’s Prosecutor asserted the need for stepping up violence against women.

In a news conference held on Friday, August 12, 2016, in the presence of the State

Security Force and Intelligence Ministry representatives, Jaafari Dowlatabadi said, “We must not overlook the effect of ‘confrontational measures’ and ‘punitive instruments’ on enforcing the laws on veiling and virtue.”

He also announced the formation of special courts for investigation of veiling and virtue crimes.

Olfat, a Judiciary deputy, emphasized on the need to increase their accuracy in dealing with violations of virtue and veiling. He told the conference that the “uprooting” of this phenomenon must be placed on their agenda.

SSF Commander Sajedinia also declared that to uphold the rules on veiling and virtue, “The SSF has sealed more than 4400 apparel stores last year.”

In conclusion, Tehran’s Prosecutor reiterated that preventive and punitive measures are the two sides of the same coin. So, although cultural measures to promote veiling and virtue are the essential solution, confrontational measures are necessary, as well.” (State-run Khabar Online news agency – August 12, 2016)

Mahnaz Sa'eidi: I am bereaved but confident of victory