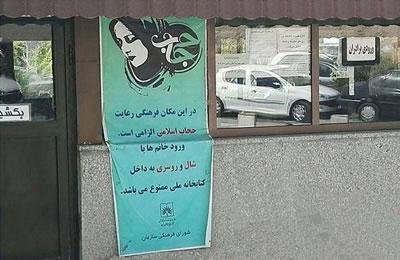 Pictures attest that in step with various repressive campaigns to clamp down on women and impose the compulsory veil on them, numerous billboards and placards are posted in cities across the country,

depriving women from public services if they do not were the head-to-toe black veil or Chador. In this way, Iranian women will have to wear the Chador in order to enter certain places.

The first picture is from a banner posted outside the “National Library” making it mandatory for women to wear the Chador if they want to enter the library. It reads: In this cultural place, it is mandatory to observe the Islamic Hijab. Women’s entry to the national library with shawls and scarves is forbidden.

The second picture is from a clinic called “Kowsar.” The placard reads in part: Beginning on July 23, 2015, this clinic will serve only women who wear the Chador…

The third picture is of a billboard posted in the city by the Public Relations of the Municipality’s Islamic Council of Chardangeh to forbid women from wearing clothes with foreign-language writings on them. It reads: My dear sister, these types of clothing are not suitable for Muslim women.

Mahnaz Sa’eidi: I am bereaved but confident of victory