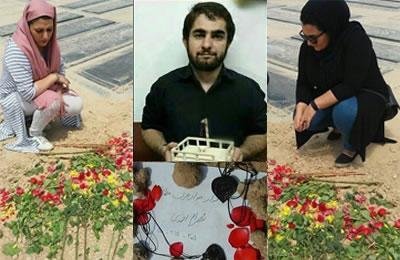 Student activist Golrokh Ayraii paid homage to Shahram Ahmadi by visiting his grave. Mr. Ahamdi, a Sunni, Kurdish political prisoner, was hanged in the course of a mass execution on August 2, 2016.

Ms. Ayraii published a post on August 16, 2016, in which she said:  Shahram Ahmadi… was innocent and he was hanged without a fair trial and without a lawyer on his side. They were more than 40 who were transferred to solitary cells to prepare for execution of their death sentences. Some of them were executed and the fate of the rest of them is unknown.”

Ms. Ayraii also noted the anniversary of the 1988 massacre of 30,000 political prisoners and wrote: “These days, in addition to the massacre of Sunni Kurds on August 2, marks the anniversary of another massacre which could not be wiped from the historic memory of this nation by any mockery or terror… The story of all the Shahram’s who were executed or hanged years ago is registered for ever in our hearts and minds. Our true history is being written not by the shameless but by those who write the truth.”