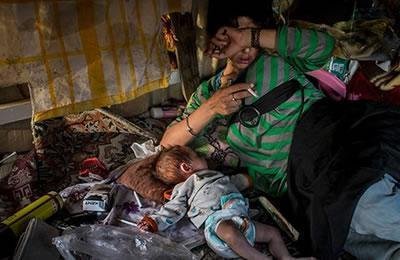 Poverty has become ubiquitous in Iran leading to various social ills. One of the tragic consequences of this situation is sale of unborn fetus and even older children.

The children sold in this way are used for a variety of purposes including begging and drug trafficking, or are mutilated and their body parts sold. This phenomenon is of such a scale that even the state-run media cannot turned a blind eye on it.

In an article published on August 19, 2016, in the state-run Tabnak website, reports on a 40-year-old woman by the name of Shiva. She has six children but has been forced due to poverty to offer her unborn infant and her 3-year-old twin girls by the names of Baran (Rain) and Bahar (Spring) for 15m toumans (about $5000).

Shiva’s eldest child, a boy of 15 years called Shahin, goes to school along with his 14-year-old twin sisters, Diba and Donya, with the backing of his grandmother who is a dressmaker.

Shiva and her husband beg on the streets to earn a living. Part of their expenses is paid by Shiva’s 62-year-old mother who makes dresses as a living.