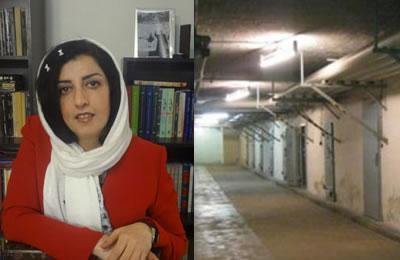 Human rights activist and advocate of abolition of the death sentence, released an open letter on August 24, 2016,

in which she described solitary confinement as “inhuman” and as “one of the most ruthless mental and psychologist tortures” routinely practiced in the Iranian jails against prisoners of conscience and political prisoners.

According to Nargess Mohammadi, thousands of civil and political activists have been confined in solitary cells over the past 37 years, without any security or legal justification.

Ms. Mohammadi was last arrested in May 2014. She described solitary confinement as “white torture” which has become “common practice” in Iran.

She added that people who are detained in solitary confinement are deprived of fresh air, light, movement, sufficient nourishment, medical and pharmaceutical provisions, books, newspapers, radio and television, contact with their families, free access to bath and restroom, and having contact with other people. This is where “white torture and brainwashing” bear result.

Ms. Mohammadi stressed that use of solitary cells is tantamount to torture and thus violates the Universal Declaration of Human Rights and the Iranian Constitution.