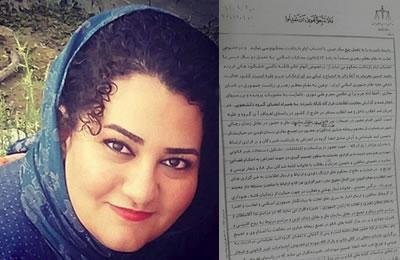 Ms. Atena Da’emi, civil and children’s rights activist, recently published her defense in the social networks in protest to the court’s refusal to hear her defense. The court has sentenced Ms. Da’emi to 14 years in prison.

Ms. Da’emi was arrested on October 21, 2014, at her residence. She was detained in Evin’s IRGC Ward 2A for 86 days, including 51 days in solitary confinement.

She was temporarily released on February 16, 2016, until her final trial and verdict on a bail of 550 million toumans after 16 months detention.

Ms. Da’emi wrote in her defense that her first trial was held in March 2015 for only 10 minutes without giving her or her lawyer any time for defense.

The recent court verdict lists three charges for which Ms. Da’emi has been sentenced to a total of 14 years in jail: Association and collaboration against the state (7 years), insulting the leader (3 years), concealing evidence of crime (4 years).

Ms. Da’emi denied all the charges in detail and emphasized that the regime does not have a single document to prove the above charges.