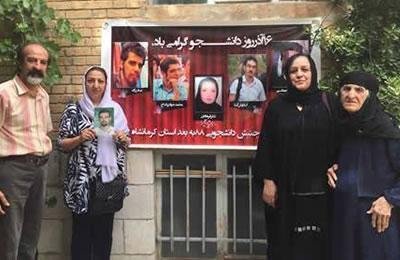 Mmes. Sholeh Pakravan and Shahnaz Karimbaeigi, activist mothers against the death penalty, continued their visits to the bereaved families of execution

victims and met on August 25, 2016, with families of Farzad Kamangar, Kianoush Asa, and Sanee Jaleh in Kermanshah (western Iran), victims of executions and crackdown on 2009 demonstrations in Iran.

About their meeting with the mother of Kianoush Asa, Ms. Pakravan wrote: She tapped her chest and said: Farzad is alive in the hearts of millions of Iranians!

Farzad Kamangar was a young teacher who fought the regime by teaching and educating Kurdish children.

Kianoush Asa and Sanee Jaleh both lost their lives in the crackdowns on the 2009 uprisings in the country. Ms. Shahnaz Karimbeigi said: Each of the beloved children of this land pave a road towards freedom and prosperity!