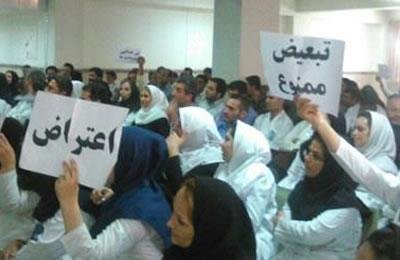 Iran: Adverse public reaction to call for monitoring of nurses

The news conference of Tehran’s Prosecutor on August 24 in which he called for inspection and monitoring of nurses’ make-up and observance of the compulsory dress-code in hospitals,

provoked much reaction. A cartoon which appeared in the state-run Donya-e Eghtesad (World of Economy) website on August 28, is an example.

The title of the cartoon reads: Tehran’s Prosecutor declared: Teams to be formed to examine nurses’ veiling in hospitals.

The cartoon depicts an old man lying in bed surrounded by mice and cockroaches in an obviously unsanitary and dirty hospital, who is being asked by an inspector: Obviously, you are satisfied with insurance, surgery, invoices, food, sanitation and care for the patient. Your only complaint seems to be about the Hijab of your nurse!!”

Iran: Women teachers carry on with their protest