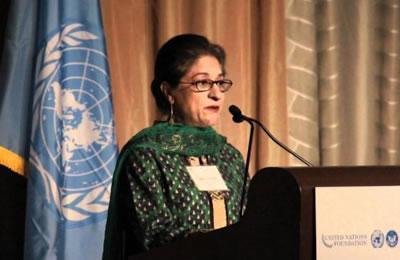 With the mandate of Ahmad Shaheed expiring in November, Ms. Asimah (Asma) Jahangir will replace him as UN Special Rapporteur for Human Rights in Iran. Mr.

Born in 1952 in Lahore, Ms. Jahangir is a renowned human rights activist and an advocate of women’s rights in Pakistan. She has been working with the United Nations for years.

In 1981, she was the first woman to set up a law firm in Pakistan. Her next step was to help found the Women’s Action Forum (WAF) that campaigned against Pakistan’s discriminatory legislation, most notably against the Proposed Law of Evidence, where the value of a woman’s testimony was reduced to half that of a man’s testimony, and the Hadood Ordinances, where victims of rape had to prove their innocence or else face punishment themselves.

In 2010, she was the first woman to serve as the President of Supreme Court Bar Association of Pakistan.

Jahangir is the recipient of several awards including the 2014 Right Livelihood Award (along with Edward Snowden), 2010 Freedom Award, Hilal-i-Imtiaz in 2010, Sitara-i-Imtiaz, Ramon Magsaysay Award, 1995 Martin Ennals Award for Human Rights Defenders, and the UNESCO/Bilbao Prize for the Promotion of a Culture of Human Rights. She was awarded an Officier de la Légion d’honneur by France.

Her prominent writings include The Hudood Ordinance: A Divine Sanction? and Children of a Lesser God.

Ms. Jahangir was the UN Special Rapporteur on the death penalty from 1998 to 2004. She served as the United Nations Special Rapporteur on Freedom of Religion or Belief from August 2004 to July 2010, when she criticized the Iranian regime for its violation of the rights of Baha’ii minority in Iran.