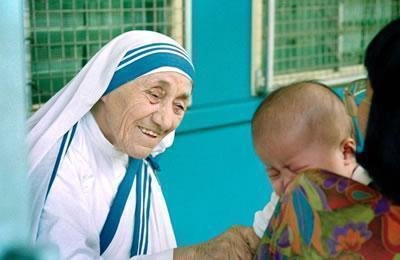 VATICAN CITY (AP) Sep. 4, 2016 — Pope Francis declared Mother Teresa a saint on Sunday, praising the tiny nun for having taken in society’s most unwanted and for having shamed world leaders for the “crimes of poverty they themselves created.”

Francis held up Mother Teresa as the model for a Catholic Church that goes to the peripheries to find poor, wounded souls during a canonization Mass that drew an estimated 120,000 people — rich and poor, powerful and homeless — to a sun-filled St. Peter’s Square.

“Let us carry her smile in our hearts and give it to those whom we meet along our journey, especially those who suffer,” Francis said in his homily.

The canonization was the highlight of Francis’ Holy Year of Mercy and may come to define his papacy, which has been dedicated to ministering to society’s most marginal, from prisoners to prostitutes, the refugees and the homeless.

Applause erupted in St. Peter’s Square even before Francis finished pronouncing the rite of canonization, evidence of the admiration Mother Teresa enjoyed from Christians and non-Christians alike during her life and after her 1997 death.

At the Mother House of the Missionaries of Charity group that she founded in Kolkata, hundreds of people watching the Mass on TV clapped with joy when Francis declared her a saint. They gathered around Mother’s tomb which was decorated with flowers, a single candle and a photo of the tiny wrinkled saint.

“I am so proud to be from Kolkata,” said Sanjay Sarkar, a high school student on hand for the celebration. “Mother Teresa belonged to Kolkata, and she has been declared a saint.”

For Francis, Mother Teresa put into action his ideal of the church as a merciful “field hospital” for the poorest of the poor, those suffering both material and spiritual poverty. He admitted even he would find it hard to call her “St. Teresa” since her tenderness was so maternal.

In his homily, Francis praised her as the merciful saint who defended the lives of the unborn, sick and abandoned, recalling her strong anti-abortion stance which often put her at odds with progressives around the world.

“She bowed down before those who were spent, left to die on the side of the road, seeing in them their God-given dignity,” he said. “She made her voice heard before the powers of the world, so that they might recognize their guilt for the crimes of poverty they themselves created.”

As if to emphasize the point, which Francis himself has made repeatedly, he repeated: “The crimes of poverty they themselves created.”

Hundreds of Missionaries of Charity sisters in their trademark blue-trimmed white saris had front-row seats at the Mass, alongside 1,500 homeless people and 13 heads of state or government and even royalty: Queen Sofia of Spain.

“Her heart, she gave it to the world,” said Charlotte Samba, a 52-year-old mother of three who travelled with a church group from Gabon for the Mass. “Mercy, forgiveness, good works: It is the heart of a mother for the poor.”

While big, the crowd wasn’t even half of the 300,000 who turned out for Mother Teresa’s 2003 beatification, thanks in part to security fears in the wake of Islamic extremist attacks in Europe. Those fears prompted a huge, 3,000-strong law enforcement presence to secure the area around the Vatican and close the airspace above.

While Francis is clearly keen to hold Mother Teresa up as a model for her joyful dedication to society’s outcasts, he was also recognizing holiness in a nun who lived most of her adult life in spiritual agony sensing that God had abandoned her.

According to correspondence that came to light after she died in 1997, Mother Teresa experienced what the church calls a “dark night of the soul” — a period of spiritual doubt, despair and loneliness that many of the great mystics experienced. In Mother Teresa’s case, it lasted for nearly 50 years — an almost unheard of trial.

For the Rev. Brian Kolodiejchuk, the Canadian priest who spearheaded Mother Teresa’s saint-making campaign, the revelations were further confirmation of Mother Teresa’s heroic saintliness. He said that by canonizing her, Francis is recognizing that Mother Teresa not only shared the material poverty of the poor but the spiritual poverty of those who feel “unloved, unwanted, uncared for.”

“What she described as the greatest poverty in the world today (of feeling unloved) she herself was living in relationship with Jesus,” he said in an interview on the eve of the canonization.

Francis has never publicly mentioned this “darkness,” but he has in many ways modeled his papacy on Mother Teresa’s simple lifestyle and selfless service to the poor: He eschewed the Apostolic Palace for a hotel room, made welcoming migrants and the poor a hallmark and has fiercely denounced today’s “throwaway” culture that discards the unborn, the sick and the elderly with ease.

In keeping with her spirit, he was treating 1,500 homeless people bussed into Rome for the Mass to a pizza lunch in the Vatican auditorium afterward.

Born Agnes Gonxhe Bojaxhiu on Aug. 26, 1910, Mother Teresa came to India in 1929 as a sister of the Loreto order. In 1946, she received what she described as a “call within a call” to found a new order dedicated to caring for the most unloved and unwanted, the “poorest of the poor.”

In 1950 she founded the Missionaries of Charity, which went onto become a global order of nuns priests, brothers and lay co-workers.

She was awarded the Nobel Peace Prize in 1979.

She died in 1997 and was put on a fast-track for sainthood soon thereafter.