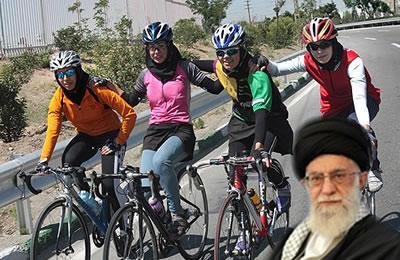 Khamenei formally announced his opposition to women’s riding bicycle in public. In a fatwa published by the state-run Fars news agency, Khamenei said,

“Women’s riding bicycle in public will attract men’s attention and exposes society to corruption. Therefore it must be abandoned.”

The state-run Fars news agency reiterated in its report, “One of government officials had published a post in her social page some time ago, attributing a fatwa to (Khamenei) claiming that he does not disagree with women’s bicycling in public if they observe religious considerations. This is while based on his view, women’s bicycling is permissible only if it is not done in public.” (State-run Fars news agency – September 10, 2016)

Amineh Qaraii: I was not the only one who lost her father in 1988 massacre