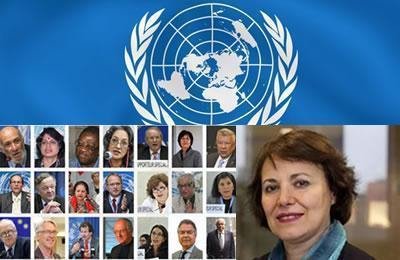 On the occasion of the 71st session of the UN General Assembly in New York, 22 former UN human rights special rapporteurs issued a statement on September 16,

2016, calling for the release of Homa Hoodfar, a 65-year-old Iranian-Canadian professor. The statement reads in part:

“We stress that Iran is breaching its national constitutional principles by arbitrarily arresting and detaining people for simply expressing their opinion and conducting academic research, as is their professional right and duty. Professor Hoodfar’s ill-treatment is a violation of the rights of individuals to freedom of thought, opinion, and speech which are explicitly protected under the ICCPR (Articles 18, 19, 21), to which the Islamic Republic of Iran is a State Party.”

“The Islamic Republic of Iran, a State Party to the ICCPR, has accused Professor Hoodfar of collaborating with a hostile foreign government against national security, promoting propaganda against the Iranian state and for “dabbling in feminism.”  It is unclear how ‘feminism’ is a threat to Iranian national security, given that Iran has committed itself to the Sustainable Development Goal #5, which is gender equality.”

“Deeply concerned about Professor Hoodfar’s arbitrary arrest and deteriorating health, equally concerned that the Islamic Republic of Iran is violating its own constitution and laws, as well as obligations under international human rights treaties, we the undersigned call for her immediate release.”