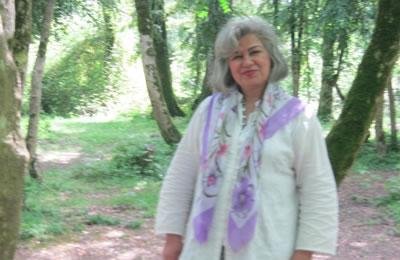 We reported last week on the ban imposed on Ms. Mansoureh Behkish from leaving Iran. Ms. Behkish lost her sister,

four brothers and brother-in-law during the executions in the 1980s and the 1988 massacre in Iran.

Ms. Behkish published on September 20, 2016, an account of her arrest and summoning at the airport on the website of the Park-e Laleh Mothers, in which she reiterated that she would not give up her activities in defense of human rights and freedom, and that she is ready to pay any price for it. Excerpts of her account appear below:

“(This time) they had do call my name from the loudspeakers several times. And I stayed in the general lobby for as long as I could and I cried out to make them and others aware of the injustices done to us. Security forces had to blare out the anthem of O’ Iran, land of pearls, to overshadow the tense atmosphere created at the airport.

“I know that there is a price for standing up to injustice and I am completely ready for it. But I will never bow down to the bullies of the judicial-security apparatus who do not abide by any moral principles and even their own laws.

“The Islamic Republic’s intelligence organization must have experienced it that it cannot dissuade people like me from our activities by such injustices and intimidations… One day, the oppressed will lose their patience and will stage a wave of protests. On that day, (the officials) can no longer stand against the enormous tide that seeks justice.”