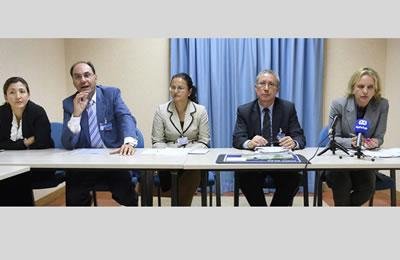 The committee of Justice for victims of 1988 massacre announced its formation on Wednesday, September 21, 2016, in Geneva.

The committee, comprised of a number of human rights experts and renowned personalities, urged the UN Human Rights Council to investigate the extensive executions of political prisoners in Iran in summer 1988 in light of the recent documents revealed.

Rama Yade, former Human Rights Minister of France, and Ingrid Betancourt, former senator and presidential candidate from Columbia, are among the members of the London-based Committee. The Justice for Victims of 1988 Massacre Committee urged the UN to form an investigative committee in this regard.

Ms. Ingrid Betancourt told a press conference in Geneva, “Such a step is very important to defend human rights… Those who ordered these killings, are today among prominent officials of the Iranian regime. Considering that these criminals have very important responsibilities in Iran, this shows how problematic the present Iranian government is.”

The Justice for Victims of 1988 Massacre Committee also held a meeting in Paris, in August and called for investigation into the massacre. In that meeting, Ms. Rama Yade talked about the significance of attending to the case of the 1988 massacre. She said, “This has been a concealed catastrophe. It has been concealed from us, from history, and therefore it is very important that today, we can pay tribute to the 30,000 men and women who were executed in Iranian prisons, the men and women who were buried in unmarked graves with disrespect.”

Ms. Yade described the 1988 massacre as a “double disaster” because “there has been no judicial investigation in this regard. This disaster is actually a manifestation of tremendous injustices done: young men and women, sometimes very young, students, athletes, and various examples of Iranian society were victimized. In fact, a generation was victimized. This is also an injustice to the families, because without an officially identified tomb, the families of the deceased have to carry around the memory of their loved ones who were victims of such injustices from one place to the other.”