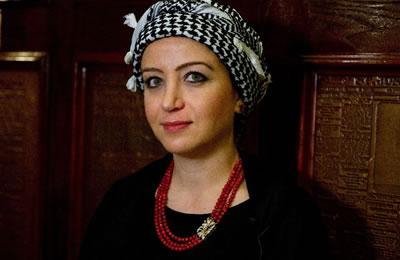 London (AFP), September 25, 2016 – A Syrian journalist on Sunday accused the UK of playing into the hands of Bashar al-Assad’s regime, following the confiscation of her passport at London’s Heathrow airport after it was apparently reported stolen by Damascus.

Zaina Erhaim, winner of the 2015 Reporters Without Borders (RSF) award, had travelled to the UK to speak at a “Women on the Frontline” event alongside BBC journalist Kate Adie.

Erhaim said her passport was confiscated by British border police on Thursday when she arrived at Heathrow.

“They told me my government reported my passport as being stolen and they have to confiscate it. They told me that they are returning the passport to the regime,” Erhaim told AFP, alleging that Damascus requested that the passport be seized in order to harm her.

“The regime can’t kill me in the UK, so it’s easier for them to just report me as stealing my own passport and force me to just be floating all over the place,” said the 31-year-old.

Erhaim, who is based in Turkey, accused the British government of “helping the (Syrian) regime in handicapping activists and human rights defenders.”

“The regime is killing us inside Syria and obviously Britain and other countries are helping them to reach us while we are travelling abroad with valid visas and valid passports,” she added.

A spokesperson for the UK interior ministry said: “Our first priority is the security of our borders and if a passport is reported as lost or stolen by a foreign government we have no choice but to confiscate it.”

Erhaim holds another passport which enabled her to enter the UK, although she remained uncertain about her future travels and whether she would be able to re-enter Turkey as her right to be in the country was stamped in the confiscated document.

“Now I only have my old passport that is completely full, so I don’t know really how Turkey is going to be treating me when I’m back,” she said.

Erhaim won the Peter Mackler Prize 2015, an MSF prize in collaboration with AFP which recognises courageous and ethical journalism. The award celebrated Erhaim’s work training around 100 citizen reporters inside Syria, including dozens of women, and helping to establish newspapers and magazines in the country.

The Peter Mackler Prize was founded in 2008 in memory of the veteran AFP journalist and North America editor.