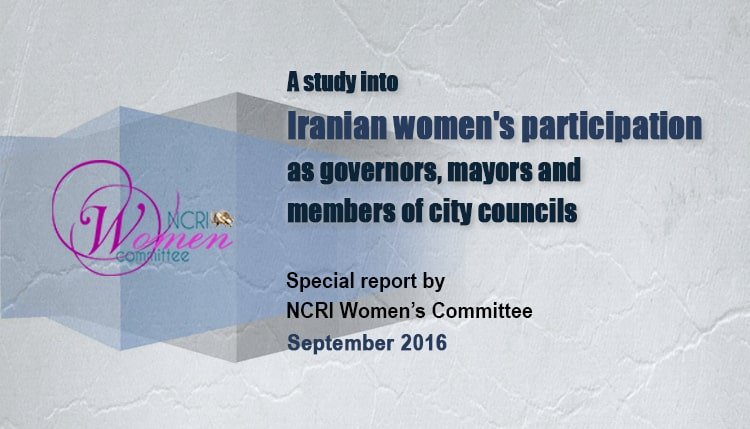 A Study on Iranian Women’s Participation as Governors, Mayors and Members of City Councils

A Study on Iranian Women’s Participation as Governors, Mayors and Members of City Councils

The state-run ISNA news agency cited an official at the presidential directorate on Women and Family Affairs in December 2015 and published the following table.

Falahati acknowledged that compared to the countries in the region such as Azerbaijan, Turkey, Saudi Arabia, and Oman, Iran ranks lower, but from an economic and political perspective it ranks even lower than Chad.

In this report, we will look at another aspect of women’s political participation, namely in the administration of cities and provinces.

In the administratoin of Iranian cities and provinces, women hold only 13 out of 2653 positions as provincial governors, governors, district governors, and mayors. The statistics are as follows:

Two of these seven women barely passed the mullahs’ discrimination.

Last year, the provincial governor of Khuzistan, Abdol-Hassan Moghtadaii announced eight women as district governors but shortly afterwards “following complaints made by the clergy” they were suspended and eventually only two of those women got the posts.

Women’s participation in the city councils

There is nothing to boast about women’s participation in the city councils, either.

The Women’s Committee of the National Council of Resistance of Iran has studied and compiled the data available on women’s participation in 65 city councils across the country, including all provincial capitals. This study can be summarized as the following:

In 16 of the 65 cities studied, there are no women in the city councils. These include Sari, Birjand, Gha’emshahr, Shoushtar, Marvdasht, Meshkinshahr, Maybod, Jahrom, Damghan, Roudsar, Lahijan, Zarand, and Sabzevar.

There are only one female member in the city councils of 21 cities including Isfahan, Rasht, Sanandaj, Shiraz, Mashhad, Hamedan, Arak, Ardebil, Ilam, Khorramabad, Saqqez, Kashmar, Malayer, Mahabad, and Miyaneh.

There are only three women in the 31-member City Council of Tehran.

The 21 members of the City Council of Tabriz also include only three women, two of whom (Elmira Khamachi and Akram Hazrati) have spent some time behind bars due to their opposition to the plans of the Revolutionary Guards Corps (IRGC).

Elmira Khamachi (pictured on the right) was incarcerated three months in solitary confinement under torture in an IRGC Prison. She was ultimately released in mid-June 2016 on a bail bond and subsequently returned to the council.

Ms. Khamachi’s refusal to wear the head-to-toe black veil in meeting with Mullah Mohsen Mojtahed Shabestari, the Friday prayer leader of Tabriz, was followed by numerous warnings to her from the IRGC Intelligence Department at the time. Elmira Khamachi had also opposed relegation of the Pasdaran Express Way to the Khatam-ol Anbia Garrison and the IRGC’s economic plans along with five other members of the city council.

Clearly, the fundamentalist regime ruling Iran has enchained the society with its misogyny. As such, it cannot maneuver on the issue of equality of women and their active participation in political leadership roles.

Not only women do not have any significant role in the administration of cities and towns, but they are subject to sex-segregtion, exclusion from the job market and expulsion from work even in the simplest jobs in these organs.

In July 2014, Tehran’s municipality issued a directive according to which women were eliminated from many municipality posts. The directive stressed that all senior and mid-level managers must employ male staff as chief of office, secretary, telephone operators, typists, etc. Some authorities officially branded the measure as sex-segregation, but at the same time, it was approved by the majority of political and religious officials. The majority of Friday prayer leaders called on all municipalities to follow the policies of Tehran’s municipality as an example.

Obviously, the Iranian regime’s fundamental policy is to exclude women from society and drive them into their homes and even the currently small participation of women has been imposed on the regime.

In September, Ali Khamenei, the mullahs’ supreme leader declared the general state policies on “family” as part of the country’s Constitution. In articles 12 and 16, the role of women has been described as the following:

Noting Khamenei’s decree on women’s increased fertility rate and population expansion in June 2016, Kobra Khaz-Ali, head of Women’s Social and Cultural Council, announced: “Since girls mature at age 9, the educational curriculum must be condensed so that youngsters could obtain their high school diploma at 15 and their bachelor’s degree at the age of 18.” (The state-run ANA news agency – June 19, 2016)

Of course, the clerical regime’s laws have already created obstacles for women in employment, and other political and social activities. The Islamic Republic’s Constitution has made it impossible for women to become a president or a judge.

Article 1105 of the Civil Code indicates that inherently, man is head of the family and can even prevent his wife from leaving home.

Article 1117 of the Civil Code gives men the right to prevent employment of their wives.

Furthermore, the clerical regime’s Labor Law in its preamble considers a woman’s role in the family as her main occupation. In the first item, it insists on the value of homemaking for women.