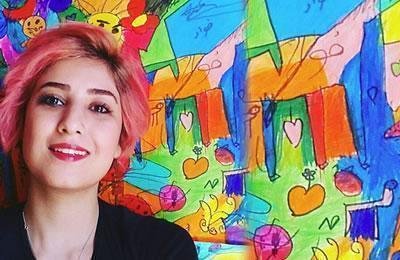 “Kites fly higher on winds blowing from opposite direction,” was the title of a statement posted by the former political prisoner and artist, Atena Farghadani, on September 29, 2016.

Ms. Farghadani published a statement of protest on September 29, 2016:

“The Fars news agency (affiliated with the Iranian Revolutionary Guards Corps) which had already published many false and disparaging articles against me on its website, has now violated my privacy by illegal eavesdropping on my phone, disseminated my pictures, and published false articles on fake Instagram pages. If it does not stop doing these hideous acts, I will publicize in the international media whatever happened to me since January 10, 2015, in the Revolutionary Guards’ solitary cells in Ward 2A [of Evin Prison] and in the notorious Qarchak Prison.”

Meanwhile, Ms. Farghadani’s lawyer, Mr. Mohammad Moghimi also published a statement underlining the illegal nature of attributing the fake pages to his client, calling it a violation of her privacy rights.

Iran: Woman executed along with her husband