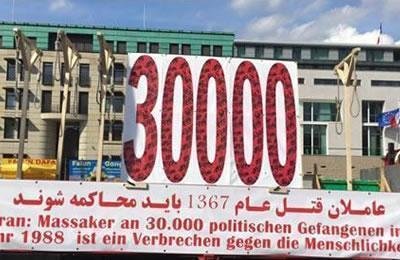 The Algerian “Jazaeruna” Association issued a statement, expressing solidarity with the movement to obtain justice for the victims of the 1988 massacre in Iran.

The statement, signed by Jazaeruna President Cherifa Kheddar, supported Maryam Rajavi’s call for prosecution of the masterminds and perpetrators of this horrible crime against humanity.

In its statement issued “in memory of the 30,000 political prisoners massacred in Iran in 1988”, the Jazaeruna Association wrote:

Members of Jazaerun Association, victims of terrorism by Islamic fundamentalists in Algeria support the call by the President-elect of the National Council of Resistance Iran, Mrs. Maryam Rajavi, on the United Nations to adopt a resolution on the 1988 massacre and those disappeared including thousands of Iranian political dissidents. We also support the formation of a court to put on trial Iran’s ruling religious dictatorship for genocide.

The President of Jazaeruna joins her voice with that of Maryam Rajavi in her call on the international community to prosecute Iran’s ruling mullahs.

The Jazaeruna Association is a member of the Coalition of Citizens’ Associations, including the victims of fundamentalism in the 1990s in Algeria.

After listening to the audio tape of Hossein Ali Montazeri, one of the regime’s former confidants, who describes the clampdown on opponents as “the worst and most hideous crime committed by the Islamic Republic”, the association believes that the conscience of mankind needs to immediately react.

In conclusion, we declare the complete support of members of Jazaeruna Association, who are families of the victims of terrorism by Islamic fundamentalists in Algeria, with the families and relatives of victims of forced disappearance in the 1988 massacre and their demand from international institutions for justice. We believe that sooner or later justice will be done against these criminals and their inconceivable crime.